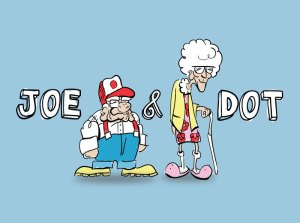 Dot has been saying that no one makes their own pudding anymore, and she insists that the kind that you mix up yourself is so much better than the kind in the “tiny” containers at the grocery store, so I decided to whip up some do-it-yourself chocolate pudding last night for dessert.

If I had known how excited Joe and Dot would be when I put a big bowl of chocolate pudding in front of each of them, I would have started making pudding a long time ago!  You would’ve thought it was Christmas morning if you could have seen the looks on their faces when I put a dollop of whipped cream on the top.  They both grabbed their spoons and dove right it.

Dot:  “Isn’t this the BEST PUDDING YOU’VE EVER HAD, Joe?”

When Joe looked up at her, his mouth and chin were covered in chocolate pudding.

Dot:  “Did you make this yourself?”

Dot:  “I just can’t even believe that people are too lazy to even make their own pudding these days, because it’s SO MUCH better this way!”

Dot noticed that I wasn’t eating any pudding, so she said, “Aren’t you going to have any?”

Me:  “No, I cheated on my diet during Thanksgiving, so now I’m back on track and trying to be good, so I’d better not.”

Joe looked up at me with big eyes and a chocolate-covered face:  “You can’t have pudding after Thanksgiving?  Is that kind of like how you’re not supposed to wear white after Labor Day…?”