I’m watching the local news in Portland with Joe and Dot, and they are reporting on a lightning strike in the Rock Creek area.

Apparently a bolt of lightning struck a giant tree last night which cracked the tree in half. The tree then fell on some poor, chubby, Old Fella’s house, and the electricity transmitted through the tree started a fire in one of the bedrooms of the house.

The old man, who was hooked up to an oxygen tank, ran to his garage to get a fire extinguisher.   He made it back to the bedroom, but he had a heart attack as he was trying to put the fire out.  Luckily his implanted defibrullator shocked his heart back to life, and he was able to tell the story on the news from the front yard of his fire damaged house.

When being interviewed by the reporter about his near death experience, the jolly old fella chuckled and said, “Well, it was the first time I’ve been hit by lightning, but it wasn’t the first time that I died from cardiac arrest.  To tell you the truth, I’d rather not experience either of those things again.”

Reporter:   “How are you feeling today, Sir?  You’re lucky to be alive!”

Old Man:  “Well let’s see…My wife’s alright and my cat’s alright, so I guess we’re all alright s’far as I can tell.  Ya know, it gets you thinkin’ about life and whatnot, that’s for sure!”

I just finished my commute from Seattle to Portland via train to arrive at Joe and Dot’s house, where I was greeted with two great big smiles.

After we all chatted for a bit, I asked Joe if he needed anything.

Joe:  “Yeah, I was thinking that you looked like someone who could do a pretty good job at that.”

Me:  “Okay, turn around and I’ll scratch your back for ya.”

While we were sitting at the table eating lunch today, I was telling Joe and Dot about meeting my friend Faith at Portland’s Bridgeport Brewery on Saturday for dinner.  Their son had brought them home some fresh crab from the Oregon Coast so Joe and Dot were both busy using a wrench to break open their crab legs while I was telling my story.

Me:  “They had the BEST beer there too!  It was called ‘Stumptown Tart’ and it’s a beer brewed with raspberries, blackberries and blueberries.”

Dot:  “We usually drink beer with our crab.”

Me:  “I think you’ve got some beer downstairs, would you like me to get one for you two to share?”

Joe:  “Are we having rocks for dinner too?!”

Joe looked at me:  “What’s the alcohol content in it?”

Joe:  “It’s easier to get drunk off of beer if you like the taste of it.” 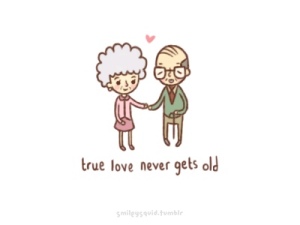 There is a mother/daughter housekeeping team that come here a couple of times a month to do the deep cleaning.  They are the sweetest ladies, and we always have fun chatting with them when they’re here.

Dot made us all get up at 6am today because she was so worried about making it to her 9am hair appointment on time.  Ugh.

The housekeepers got here after Joe and I had already dropped Dot off at Toot’s place.  Just a reminder:  Toots is the only hair stylist in town and she’s kind of a big deal around here.

Of course the first thing that the housekeepers asked me is “where’s Dot?”  Me:  “She’s visiting Toots.”

Joe cracked up and said, “Yeah, she needed to see Toots.  You should’ve seen how FUZZY her hair was!  I didn’t want to say anything to her, but her hair looked pretty wild.”

We all cracked up.

The housekeepers were telling me about their weekend trip to Seattle, and how they got stuck in terrible traffic.

Me:  “Seattle traffic is the WORST!”

Housekeepers:  “Well it was even worse than usual because they had a section of the city closed off for the Naked Bike Ride…”

Joe was napping in his chair while we were talking, but he perked up when he heard “Naked Bike Ride”.

I explained to him how in Portland and Seattle a group of folks get together and ride their bikes through the city naked.

Housekeepers:  “Yep.  Some people are into that kind of stuff…”

Joe:  “It doesn’t seem like that would be very comfortable.”

We all agreed with him and were unanimous in saying, “I know!  I’d never do it in a million years.”

Joe looked very concerned:  “Yeah, but I mean…It’d be worse for guys.  I mean…their parts could get caught up in the spokes!”

We all cracked up.  The housekeepers said, “I hadn’t thought of it exactly like that…”

Joe:  “Well you’d better really think about it before you just get naked and jump on a bike!  I hope they warn people about that!”

I attempted to look serious when I said, “I’ll be sure to call them up and tell them to add your warning to the flyers that they hand out to everybody.”

THUD THUMP THUD – George went back to reclining in his chair and napping.